Animators are a specific type of timer, specially designed for on-screen animation purposes:

To create an animation that runs for an indefinite time:

This example looks the same as the one using an Ecore timer. The ecore_animator_add() function takes the callback function and data to pass to it, and returns an Ecore_Animator object. The function is called at a system-defined interval until it returns ECORE_CALLBACK_CANCEL instead of ECORE_CALLBACK_RENEW.

An animator callback for an animator running a specific time has a different prototype than the forever running animator.

To create and destroy the animator

To create the animator

In this example, the animator is specified to run for five seconds. The function returns ECORE_CALLBACK_CANCEL as soon as the position among the timeline passes half of the duration, 2.5 seconds.

Ecore can generate a virtual position from the original one using ecore_animator_pos_map(position, map, v1, v2). Several maps are available: 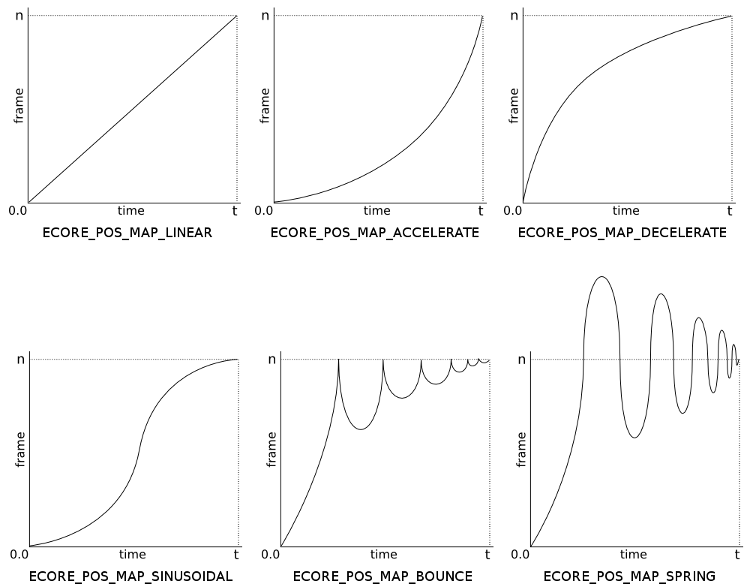 To destroy the animator

Use the ecore_animator_del() function. The animator to destroy must be running, that is, it has not returned a false value. If the animator is not running, the function cannot be called.

To manage the animator

To pause the currently running animator

To query Ecore for the interval between 2 animator calls

To change the interval

Use the ecore_animator_frametime_set(interval) function. Note that too small a value causes performance and power consumption issues, and too high a value makes the animation jerky.