Rage is a video and audio player written using the Enlightenment Foundation Libraries (EFL) with some interesting features: 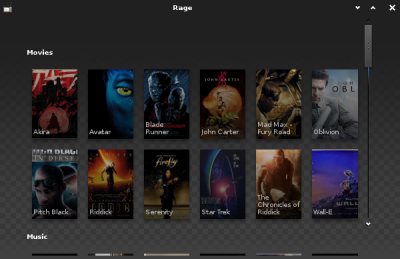 Rage is a simple video and audio player intended to be slick yet simplistic, much like Mplayer. Use the command line to play media files or just drag and drop them onto the Rage window to add them to a playlist.

Run Rage with no command-line arguments to enter video browser mode. From here you can display a graphical overview of everything on your playlist by hitting the / key or just hovering your mouse over the right-hand side of the window.

Rage also has a full set of key controls. See the README for the complete list. It automatically searches for and displays album art when playing music if they aren't already cached. It even generates thumbnails for video timelines and allows you to preview clips by hovering your mouse over the position bar at the bottom of the window.

Rage will cache any album covers it downloads for future use. This makes it easier to see which tracks are coming up next just by viewing the album cover or image in the playlist. 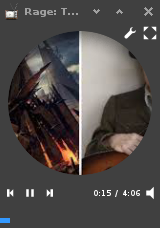 Your playlist isn't just a series of still images, but a full live playback of the video in-place. You no longer need to identify media from a single badly chosen thumbnail but can actually preview clips to know what they contain. Feel free to scroll through lists as much as you like.

If you want to jump to a specific part of a video you know well such as your favorite film, just hover the mouse over the seek bar to find thumbnails of the section of the timeline you're interested in. 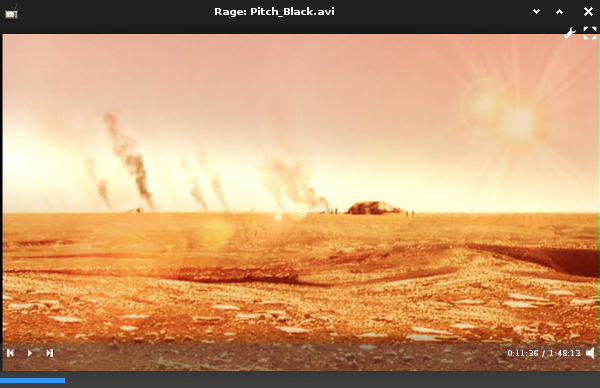 If you want a simple video player like MPlayer, but with a few more visual niceties, then Rage may be for you. Almost all of the nuts and bolts it relies on for video playback and UI are provided by EFL itself or by something EFL wraps, like GStreamer, Xine, VLC and so on. Since it uses EFL, Rage will work in X11, Wayland, even the raw framebuffer with the Framebuffer console (fbcon) or the Direct Rendering Manager (DMS) subsystem. 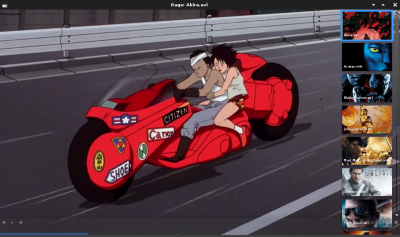