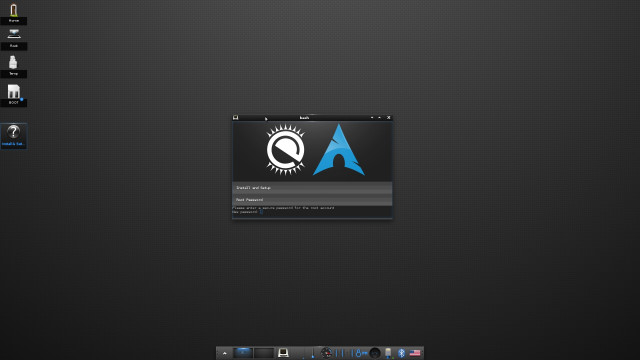 This is a first cut at a pre-built Arch Linux disk image for the Raspberry Pi with Enlightenment, EFL, Terminology and Rage all installed from git (as AUR packages). It includes a setup tool to configure the system to your liking in basic ways. It sets up a repository for updates of the overlaid/added AUR packages used as well as regular Arch Linux ARM (alarm).

To install this on a MicroSD card, simply plug one into some card reader you have and do the following, simply replacing /dev/sdX with the correct device for your MicroSD card. You will need at least a 4GB card for this to work, but larger cards will give you more room to install packages and user files later on.

Once the above dd command complete, power down your Raspberry Pi, plug the card in, then power it up and wait for the desktop to come up. Double-click on the “Install & Setup” icon on the desktop to begin the setup process. Please forgive the roughness of this tool as it's a first-cut shell script to be replaced in future by a proper GUI tool.