EFL, or the Enlightenment Foundation Libraries, powers millions of systems from mobile phones to set-top boxes, desktops, laptops, game systems and more. EFL is recognized for its forward-thinking approach, which allows product designers and developers to offer more than the run-of-the-mill user experience of the past. This is where EFL excels.

EFL is written in C and exposes all of its APIs by default in C. Binding support exists for several languages, including Python, C++ and Lua. As the object based Unified API is completed more language bindings will become available.

The main focus is on C mostly because the underlying libraries have been around for a long time, were originally written in that language, and the developers of those libraries prefer C. Moving from C would also limit the audience. C programmers couldn't access a C++ API for instance, whereas a C++ programmer can access both C and C++. The developers aim to have bindings auto-generate so programmers of various languages can get native-like APIs for their chosen language from the same core EFL API set.

Efl is currently undergoing a transition from our current stable module-based presentation where each area has its own name to a unified structure all under the Efl namespace.

EFL operates on the same "main loop" concept adopted by GTK+ and many other toolkits. Once you initialize an application, it enters the Ecore main loop.

The mainloop is designed efficiently. It will remain idle, consuming virtually no CPU resources until an event occurs. Events can be based on user input, such as using the mouse or time-based. Ecore will then handle the event appropriately. 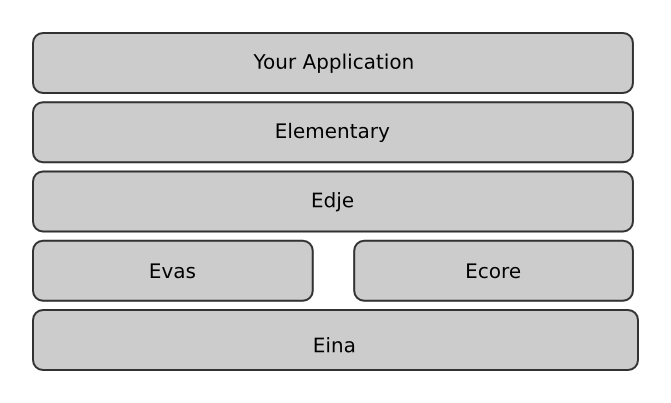