Enlightenment was launched in the 1990s by Carsten "Rasterman" Haitzler as an easy to use Window Manager (WM) for X11. Since then it has expanded to include the one million lines of C code that form the Enlightenment Foundation Libraries (EFL) and a diverse set of applications. There's a vibrant and active community of developers and users who work on and use the code every day. 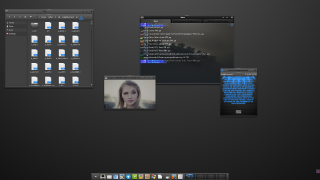 Enlightenment is classed as a "desktop shell" as it provides everything you need to operate your desktop or laptop, but it is not a full application suite. This covers functionality including launching applications, managing their windows and performing system tasks like suspending, rebooting, managing files and so on.

The Enlightenment Project is moving towards using Wayland as the base display system, while Enlightenment itself is to become a full Wayland compositor in its own right. This takes time, and there have been some bumps along the road, but the goal is that support for X11 will be eventually be discontinued.

Enlightenment also serves the Window Manager and Compositor for Tizen, due in no small part to its efficiency and breadth of features.

See About Enlightenment for more details.

Enlightenment is primarily developed on the GNU/Linux platform. This means that most GNU/Linux distributions, including platforms like Tizen, should work with Enlightenment straight out of the box. There are also efforts to ensure Enlightenment can run on Microsoft Windows and Apple macOS, though these are at varying stages of completion.

The Enlightenment Foundation Libraries (EFL) drive Enlightenment, but they can also be used independently or built on top of one other to provide useful features and create powerful applications.

The core EFL libraries are much more efficient in both speed and size than their GTK+ and Qt equivalents, and have a smaller memory footprint.

EFL covers a wide range of functions including inter-process communication (IPC), graphics, audio and even location services. Other powerful features include file handling utilities, widgets and user interface controls, thumbnailing and rendering via scene graph. You can discover more of EFL's capabilities by visiting the About EFL page.

The Enlightenment Foundation Libraries already power millions of systems from mobile phones to set-top boxes, desktops, laptops, game systems and more. It is recognized for its forward-thinking approach which allows product designers and developers to offer more than the boring user experience of the past. This is where EFL excels.

The Enlightenment Project is also responsible for a range of applications written using EFL. Aside from being very useful programs in their own right these serve as great examples of what EFL can do for you.

Terminology is a terminal emulator bristling with advanced features including: tabs, splits, 256-color support, wallpapers (even animated ones), in-line display of media (click on a file path to a video and watch it play), link detection, compressed scrollback stored in RAM, translucency and a gorgeous look and feel inspired by classic CRT monitors.

Designed to be a clean and simple media player, like MPlayer, Rage focuses on video by not filling your window with unnecessary controls and menu bars. These are instead displayed with a simple mouse over, which also displays thumbnails of a video's timeline.

Rage also has a live playlist which will show all currently playing videos. It offers full keyboard and mouse controls as well as supporting Drag and Drop to add more files to your playlist. Use the audio-only mode to grab album cover images and cache them.

Ephoto is an image viewer and editor written with a focus on simplicity and ease of use while taking full advantage of EFL's speed and tiny memory footprint. Browse images via thumbnail, single view with editing features, or display a moving slideshow. There are neat filters to try, from Gaussian blurs to intricate sketches. Ephoto is extremely versatile, in that it can act as both a simple viewer and an advanced image editor.

E16 is the predecessor of the current Enlightenment Window Manager series (0.17...).