What is an EDC File?

An EDC file stands for Edje data collection. It is a text file that contains special code format describing the position, size, and other parameters of graphical elements that compose the visual aspect of your application. In addition to graphical elements, it can also handle sounds.

The syntax for the Edje data collection files follows a simple structure of “blocks { .. }” that can contain “properties: ..”, more blocks, or both.

An EDC file has the “.edc” extension.

EDC file needs to be compiled into a “.edj” file using Edje library tools. After compiling the “.edj” file can be used by a EFL/elmentary application.

Here is an example about compiling helloworld.edc to “.edj” file using edje_cc tool:

This command creates a helloworld.edj file.

An EDC file can use external files such as sounds, images, or fonts. The path to these resources are passed to the edje_cc tool so that they are included in the final “.edj” file.

The code example below shows you the structure of an EDC file. It is a collection of groups that contain parts and programs.

Groups are identified with a name, parts correspond to the graphical elements. Each one of them can have several states that describe a specific position, size, and visual aspect. Programs contain the program code, such as interaction with the main application through signals. Also animations are defined here (changing a part state using an animated transition).

The description field is where the state of a part is written.

As an example, here is a simple EDC file that contains only one part and one program. The part is a rectangle with blue state and red state, the program changes the state from blue to red when user clicks on the rectangle.

A program is triggered when receiving a signal from a specific source (here all the sources are taken into account). When launched, it does the action (changing the state of a part) on the target (the rectangle).

The previous example showed how to change the state of a part. It is also possible to use the transition parameter to create an animation between the 2 states. You can specify a transition type (ACCELERATE, DECELERATE, SINUSOIDAL, LINEAR, …) and length (in seconds) of the transition.

Edje calculates all frames needed for the animation. The result is a smooth animation between the two states and it takes 2 seconds.

Size of a part (in pixels) is set using the min and max parameters. The following code example sets the minimum and maximum size of the rectangle part to 200×200 px.

Position of the parts is defined in the rel1 and rel2 blocks. rel1 and rel2 blocks are used to define respectively the upper-left corner and the lower-right corner of the part. Position can be defined relatively to other parts (with the relative parameter) as an offset (offset parameter). When using relative positioning, the to, to_x and to_y parameters are used to define to which part the relative positioning is done. If nothing else is specified, the positioning is relative to the parent's part.

The rel1 and rel2 structures also support offset which is a complement to the relative positioning: the corners are first placed according to their relative parameters and then adjusted using the offsets.

The picture below shows the pixel positions for a 4×4 rectangle. The indices start in the top-left corner at (0, 0) increase to the right and to the bottom. Since the indices have started at 0, the 4th pixel has an index of 3.

Therefore, in order to create a 2×2 blue rectangle centered inside that green square, the top-left corner has to be (1, 1) and the bottom-right one has to be (2, 2). 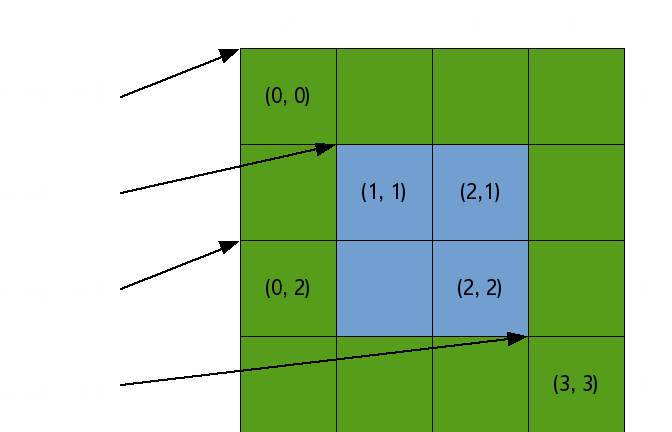 For most tasks, relative positioning is simpler than using offsets. Offsets are usually left for fine-tuning and creating borders.

The example below is similar to the previous one but uses relative positioning instead of offsets to achieve an equivalent at 4×4 but could scale to larger sizes.

Just like in the previous example, the blue rectangle is named and Edje is told what the object of reference is:

The image below shows how to refer pixels using relative positioning when the offsets are (0, 0). 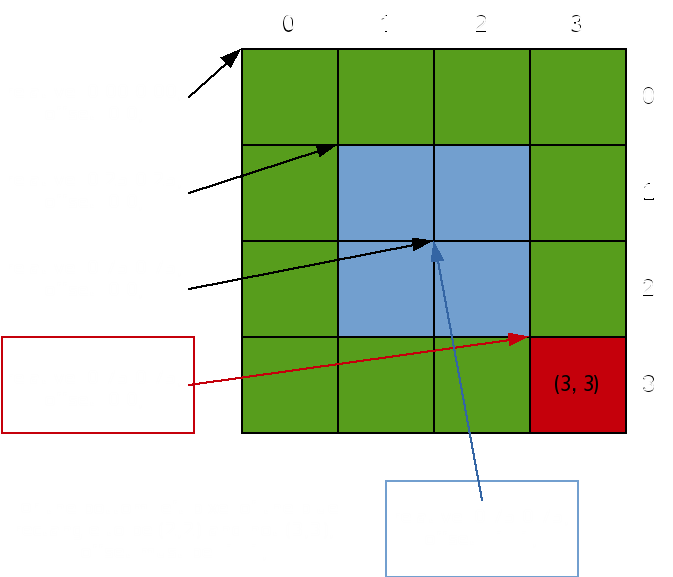 Since -1 -1 is the most common offset wanted for rel2, it is the default value; i.e. the default behavior is practical.

When the EDC file is composed of a lot of parts, Edje calculates the size of the global Edje object, by taking all the parts and their parameters into account. Some parameters have an role in this calculation and affect the global size:

fixed parameter can only be used on TEXTBLOCK type parts. Setting this parameter to fixed: 1 1 will not take into account the part for the calculation of the global size.

Size hints are not a size enforcement, they just tell the parent object the desired size for this object. Then, the parent tries to get as close as possible to the hint.

Hints are set in an Evas_Object using the evas_object_size_hint_*() functions.

This sets the hints for the object's minimum size, given in pixels.

Here the horizontal and vertical min size hints of an Evas_Object are set to 0 pixels.

This sets the hints for the object's maximum size, given in pixels.

Here the horizontal and vertical max size hints of an Evas_Object are set to 200 pixels.

This sets the hints for the object's optimum size.

The following code example defines that the optimum size of a part is 200×200 pixels.

This sets the hints for the object's aspect ratio. Available aspect size hints are:

The other parameters are aspect width and height ratio. These integers are used to calculate the proportions of the object. If aspect ratio terms are null, the object's container ignores the aspect and scale of the object and occupies the whole available area. 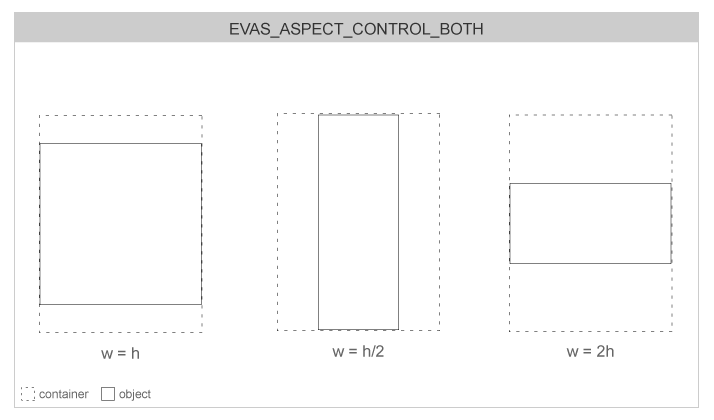 The following code example sets the aspect size hint to EVAS_ASPECT_CONTROL_BOTH with a width of 100 and a height of 200. So aspect ratio should be 1/2.

This sets the hints for the object's alignment. This hint is used when the object size is smaller than its parent's. The special EVAS_HINT_FILL parameter uses maximum size hints with higher priority, if they are set. Also, any padding hints set on objects are added up to the alignment space on the final scene composition.

In the code below, the special EVAS_HINT_FILL parameter is used.

This sets the hints for the object's weight. The weight tells to a container object how the given child is resized. Using EVAS_HINT_EXPAND parameter asks to expand the child object's dimensions to fit the container's own.

When several child objects have different weights in a container object, the container distributes the space it has to layout them by those factors. Most weighted children get larger in this process than the least ones.

Here the container is asked to expand the object in both directions.

This sets the hints for the object's padding space. Padding is extra space an object takes on each of its delimiting rectangle sides. The padding space is rendered transparent. Four hints can be defined, for the left, right, top, and bottom padding. 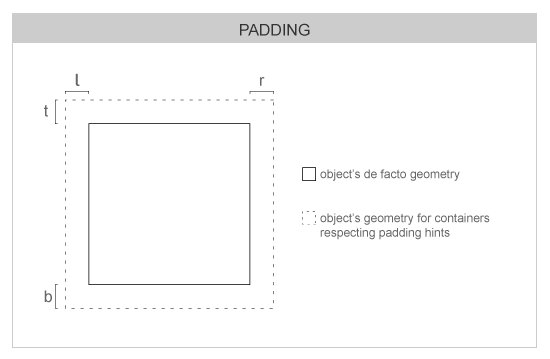 Here the padding hints are set to 5 pixels on each side of the object.